Little Women, and growing up. 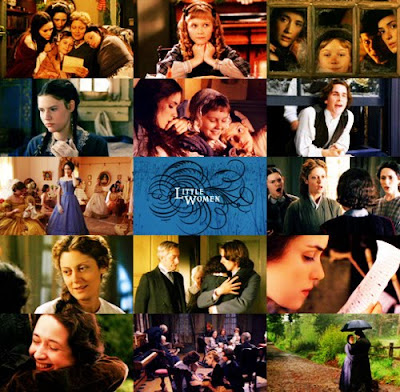 When I think of Christmas movies, Little Women is one of the first that comes to mind. I know it's not strictly a Christmas film, but many of its major moments are nestled within Christmas celebrations; also, there is snow and carols and wintryness, all of which lends to the Christmas feel, even if it isn't a strictly antipodean interpretation of the season.

I watched it again on Monday afternoon with my mum and little brother, and I was amazed by how much power this film has to pull me back into my childhood. It's like a massive rush of memories. Not only can I quote virtually every line, but I recall all the thoughts and feelings and emotions this film and the book (which I have read at least a dozen times) have ever evoked.

I remember where I was when I started reading Little Women that first time, and I also remember who I was. I remember recognising my graceful sister Andrea in Meg, my sweet sister Lauren in Beth. My brother Nick -- though he never liked the comparison -- was definitely Amy, hilarious and quirky and confident and impetuous (and a little dissatisfied with his nose). I remember feeling that first spark of kinship with Jo, wanting to be great and do great things but being hampered by an abundance of flaws. We share so many of the same dreams, Jo and I, and so many of the same failings -- even down to the too-large hands and a hatred of posh parties. Of course, I never turned down the proposal of a creative, handsome neighbour who was once my best friend. But I'll forgive Jo that.

Actually, from that point on, the film version of Little Women always broke my heart a little. As a teenager, I wanted to stop the movie halfway through, at the Christmas scene when Father comes home from the war and though you know John Brooke is going to steal Meg away, he hasn't actually done it yet. I wanted it to stop before Laurie and Jo become something more than best friends and then (just as quickly) something infinitely less. I wanted it to stop before Beth dies and Laurie becomes a ratbag with horrible facial hair and Jo realises that she doesn't fit in anywhere and she probably never will. The second half always seemed to me to be too sober, too sad.

This time, however, I found my heart resonating more with that second half of the film. Suddenly it seemed to me to be incredibly honest. Yes, my childhood and teen years were very much like the early half of Little Women -- full of adventures and creativity and small sorrows and large joys -- but being a grown-up is so much more like the second half. People change and friendships dissolve. Life turns out differently than you expected.

You know, I always resented Professor Bhaer because he wasn't Laurie. This time round, I realised Professor Bhaer was right for Jo at the right time. She could have married Laurie and, though she refused to believe so, they could have actually been happy together. After all, she did love him; she just didn't understand that there are all different kinds of love, and she was looking for something in words she'd recognise, words she'd write herself to make the perfect happy ending. I think it took her several more years of life and learning to realise that love is not as simple as the fairytales make out, and yet in other ways it's simpler. Professor Bhaer wasn't the second choice; he was Jo's first choice, made once she knew how to recognise real love.

I used to think that the first half of Little Women is all joy, and the second half is all sorrow and a mature sort of resignation to dreams unfulfilled. Yet the second half of Little Women is the portion where the dreams actually do come true. Meg becomes the little wife and mother she was always in training for. Amy travels to Europe and marries the rich fellow she once imagined. And Jo's story and her heart both find a safe haven. But in amongst all the dreams-come-true are the dreams shattered; grief walks with the dreams, hand in hand.

This time, I finally understood that. Being a kid was super; life was chock full of joy. Being an adult is different. There is just as much joy, but it's of a deeper kind -- and it's woven in with the sorrow, too.

Sometimes you just have to look harder to see.

Laura Elizabeth -- you rescued my post from a commentless death, bravo! I'm so glad you're loving the celebrations this year. I'm a big fan of celebrationishness. Tell your dad the blogging world is waiting with hald breath.
Posted by Danielle at 11:58 AM

Email ThisBlogThis!Share to TwitterShare to FacebookShare to Pinterest
Labels: childhood, growing up, movies that make me want to write