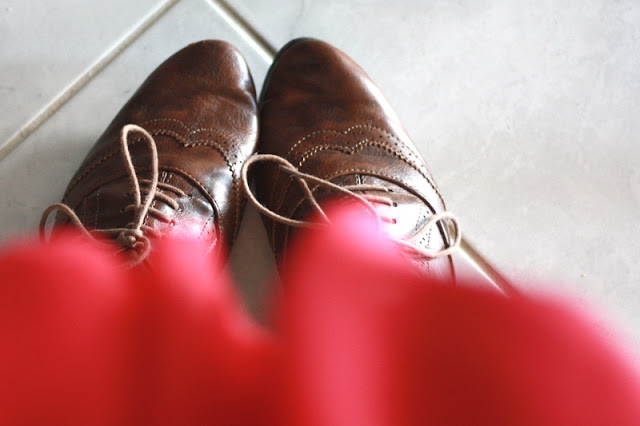 I have some actually stunning friends. Like, the sort of beauty that makes heads turn on the street to watch it passing by. And sometimes I just want to ask these friends: “What it’s like to be beautiful? What’s it like to know that, in spite of your own perceived flaws (because we all have those), the majority of people who brush shoulders with you in this world will find you lovely?”

I am genuinely intrigued at the thought of this, but I have not found a way to ask the question without it sounding plaintive and pathetic. Even as a little girl, the idea of being the less beautiful one in the crowd was familiar to me. My sister Andrea was tall, blonde, and athletic. My sister Lauren was dark and olive-skinned, with big, soulful eyes and eyelashes a mile long. I was (or at least I thought I was) plump, with a mouth that was an orthodontist’s dream as well as perpetually frizzy hair. At school, my two best friends were adorable. One was tall and blonde with cute freckles. She did dance classes and was the first among us to get a bra. The other was tiny, whip-thin and dark-haired. She excelled in athletics as well as in academics. I was just smart-but-not-amazing-smart, very bookish, and pretty bad at pulling together an outfit.

Some of that stuff shifted as time went by. I got braces. I mostly outgrew my teenage skin. I finally got a handle on controlling my own hair (even though some days I just throw my hands in the air and declare that I am not going to bother), and occasionally I find the perfect outfit that I know is just exactly right for me and my weird body. Other stuff, however, hasn’t changed – like the understanding that I’m not the pretty girl in the room and I never will be. There are things about me that are considered unattractive. I know this because I have a pair of working eyes and because little kids say the things that grown-ups have learnt not to. And since I have worked with little children since I was in my teens, I get to hear their frank appraisals of my appearance on a semi-regular basis. The worst part of this is being reminded about flaws you are frequently trying to forget. The best part is that when they give a compliment, it really is sincere. Man, kids crack me up.

Perhaps the above sounds like a convoluted confession of really poor self-esteem – and I suppose it may be read as that in one sense, if only because the world is kindest to the beautiful people, and not being one of them has messed with my confidence in a number of ways. But besides all that, what I am really trying to say is that the whole idea of beauty and its place in the world is something I have wrestled with and pondered since I was small. I’m still far from discovering concrete answers or a clear resolution, but I feel like this issue must be highlighted, that we must discover what we think about this topic so that we can formulate how to see ourselves and the others around us, how to evaluate what import we should place on beauty. Beauty is no longer a peripheral idea; beauty is currency in this generation, and if we don’t actively work to formulate our beliefs about this topic, societal constructs will formulate them for us.

This was driven home to me anew a few months ago when I stumbled across an article that broke my heart. In it, Ann Bauer details her experiences growing up with the understanding that she was ugly. Hers is no self-pitying self-deception; rather, it is an awareness that grew from the way people in her world saw her and engaged with her. “We’re the same, you and me,” one man told a teenage Ann. “We’re both too ugly for anyone to love.”

When Ms Bauer shared her love story in a national publication, people wrote to her with scathing responses: “You’re a hag who looks like your husband’s mother, and my wife agrees. He will leave you soon.” That was only one of a number of criticisms that essentially said: “You don’t deserve to be with your husband, because you’re not beautiful enough.” Such destructive remarks proved damaging to Ms Bauer’s marriage as she struggled to believe that her husband was the one rare man who could stand to look her in the eyes and not be offended by her apparent ‘ugliness’. Eventually, Ms Bauer came to a sense of peace in her appearance that was highlighted during a night in Budapest:


Evening fell sharply there, which, I discovered, is the reason Hungarian women wear so many layers. The weather cracks at dusk, going rapidly from springtime sun to an ice blue cold, so skirts and shawls and long, winding scarves are essential.

Thus, I was dressed as a native the night we attended the opera: a long black skirt, leather boots, and floor-length cape. It was intermission. John was in the men’s room and I was waiting for him, when I turned and found myself looking into a full-length mirror. And I saw something I’d never seen before: myself, in a sea of women who looked just like me.

Part of it was the clothing. We were nearly all in black with trails of fabric wound around our shoulders and necks. But it was also the face, the form. Everywhere I looked in that lighted glass, there were women with large features, deep-set eyes, rounded cheeks, riotous hair, and delicate-yet-meaty little bodies. We were, in other words, an army of ugly people.

Only, for the first time in my memory, we weren’t. I wasn’t. I was normal, even conventionally attractive. Stylish. Interesting. Sexy. Simply that.

I stood in front of that mirror in the Hungarian State Opera House, watching couples mill. Men holding the arms and hands of dozens of women who could’ve been my sisters, mother, and daughters, tipping their heads back, kissing them lightly, gazing with naked admiration at faces like mine.

I am happy for the confident conclusion to Ms Bauer’s story, but saddened that such a story even exists. What broke my heart the most was that this woman, in her profile shot, is anything but ugly. Her nose, frequently the object of taunts and criticism, looks fine to me. Ms Bauer is not a supermodel, no. But few of us are. And it made me realise that the reason I’ve been protected from the cruelty of randoms is not because I’m somehow better-looking than this sharp-thinking, intelligent, creative, feminine woman; no, it’s simply because I’m not in the public eye and I’m surrounded by people who think I’m beautiful because they love me, rather than loving me because I meet some required standard of beauty.

In the appearance-driven climate of our ‘now’, we think beauty deserves something. It deserves love, it deserves admiration, it deserves the better job, it deserves notice -- and ugliness does not. None of this is true, of course. Beauty is a collision of genetics, as randomly assigned (at least to our limited perspective) as the extra chromosome that results in down syndrome (as in the case of my brother), or the deformity that is clubbed feet (that's me). Beauty is a gift of grace distributed in the most confusing way, yet somehow we have given it grave import and ranked it far above other similar assignations.

Beauty is not a virtue in and of itself; it’s a characteristic. No more, no less.

And of course, this is just the beginning of the conversation. I have more thoughts -- including my problem with the word 'ugly' and the related idea of 'beauty' referring merely to the external -- and there could be a whole discussion about the seemingly innate craving to be desirable, to be perceived as beautiful even if not conventionally pretty. Would love your thoughts on this and a follow-up post to come in the next few days.
Posted by Danielle at 9:53 PM

Email ThisBlogThis!Share to TwitterShare to FacebookShare to Pinterest
Labels: beauty, being a girl, being human, society and stuff